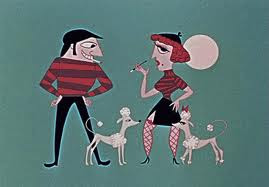 It's probably well known to any woman who has traveled to Paris that many French men simply have no problem letting women know of their interest in them. I have suffered through a good many really bad pick-up attempts in Paris over the years.

One of my favorite flirtatious encounters caught me off guard when I was looking through a clothing rack at an outdoor market in downtown Paris. It is important to remember this happened before I really understood that it's very important for a woman's survival to not look at and smile at a Frenchman, especially one on the prowl (which is a lot of them). Doing this makes him think you want to have a roll in the hay -- like now. I was not initially aware of this important French fact......

Anyway, I said the typical, considerate "Bonjour monseiur" along with the customary American eye contact and smile. He immediately alerted, raised his eyebrows, smiled back and said in his sexiest voice while leaning over the clothing rack, cooing, "Bonjour madam, and how can I help someone as lovely as you today?" I was very obviously American, because if I were a smart French woman it wouldn't have even gotten this far. A great deal of uncomfortable testosterone-induced flirting ensued. Finally, I looked at him and sternly said, "Monsieur, I am old enough to be your mother!" To which he very easily replied, raising his eyebrows and smiling slyly and whispering, "And what is wrong with mothers?"

Well, I would have been a bit honored to be flirted with by a guy at least  my half age, but I knew I wouldn't be the only mother he would attempt to lure to his rack of clothes that day.

Happy Mothers Day. You are all beautiful and desirable....even if a Frenchman isn't there to tell you so.
Au Revoir,
Anastasia
Posted by Anastasia Korbitz at 8:00 AM