Je suis malade, but not really.... 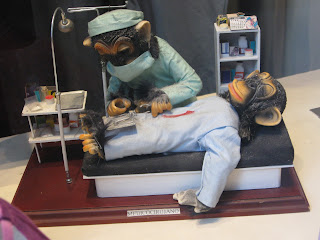 However, if I "were" under the weather for the last several days in Paris, I certainly chose the best place to have some weird attack, if I had an attack.

I was dining with my three pals in St. Germain du Pres last night and all of a sudden my cough, which I didn't really have, got out of control. I left the street- side cafe so I wouldn't be so disruptive. Let's just say the non-cough got to the point that I felt I was losing my breath. A kind lady took me into another man's shop where he sat me down, gave me water and had me take several spoonfuls of the most delicious honey ever. (Did you know Paris has several beehives all over Paris? But that story is for another time.)

My non-cough was quite disruptive to the other customers in the shop, but the owner continued to tell me sit, rest and sip. I said merci beaucoup many times....and in true Paris form the man said, raising his eyebrows, "Oh,  I am happy to assist any beautiful woman who is in distress." Here I am hacking up a lung in this lovely boutique, and I'm sorry, but even a super model wouldn't look appealing hacking up a lung. Have you ever watched yourself cough...it doesn't look sexy.

"Now, if you were a man," he continued with a sly smile as he waved his hand in the air, "forget it...I would let you die right there on the street."  He gave me yet another spoonful of delicious honey....

As my lungs were filling up again with air I said, "You have been so kind. I have found so many kind Parisians." He looked at me shaking his head. "The people you are finding in Paris who are kind are not true Parisians, we come from other places.  True Parisians," he said with a turned up nose, "are not so nice."

Thank goodness for a really nice non- Parisian, Parisian who helped a woman in non-distress....

Au revoir,
Anastasia
Posted by Anastasia Korbitz at 1:41 AM