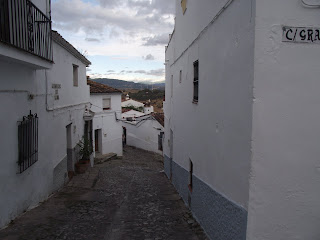 Driving the narrow streets of Jimena de la Frontera is like trying to thread a needle with jute. The streets originally carried mules and carts and they certainly aren’t meant for even the tiniest of cars. We found ourselves quite lost at the top of the town and our concern was not so much that we were lost, but how the hell we were even going to get our car back down the tightly wound, slippery cobbled, 90 degreed slopped roads without killing ourselves or anyone else. After watching our lives pass before our eyes several times (all the while convincing ourselves that it was quite an adventure and aren’t we lucky to be having such an adventure) we successfully made our way back to the center of town where we promptly called our contact, Annie, to inform her we were painfully lost.
She and her sidekick Harriett in no time had us at the doorstep of the most charming Spanish villa (more on that later). The two British ladies were delightful as they showed us around the villa- and all its charm and quirks- and then proceeded to inform us of the best little grocery store and restaurants in our neighborhood. We shook our heads intently in understanding as our jet-lagged brains tried to soak in all the details.
Off the ladies went and now we were on our own. Our first order of business, the grocery store…now, where did they say it was again? We began to wander around in a daze, when all of a sudden, a British woman’s voice boomed, “Adam and Anastasia, where are you going?” It was the beloved Harriett.
We ended up dining with them that evening, swapping stories of our lives and how they ended up in living in Spain. Annie’s story was sweet and straightforward, but Harriett was more mysterious.....
Adios, Anastasia
Posted by Anastasia Korbitz at 3:43 PM