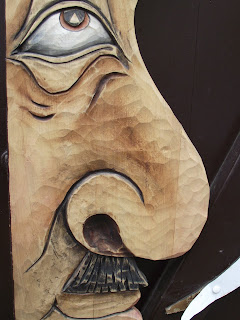 Jessica and I were at the shop painfully late, as usual, and we were getting punchy. So at about midnight my crafting sister felt it was time for a cuppa Joe. I was in the kitchen area putting some things away when I heard her say to herself, "Hmm, the message on the coffee maker reads 'clean me'.  She shrugged her shoulders and proceeded to add the usual 1 cup of grounds for every one cup of coffee to the basket. I think it started smelling stinky the minute it started brewing.

Well, the sludge finally settled into the coffee pot and it was time to have a cup. I looked at Jess. "I think it stinks," I said. "No, it smells fine," she retorts- with a sense of self-convincing desperation in her voice. She poured two cups and I proceeded cautiously. I took a sip of the thick, smelly swill. I recoiled. "Jess, it smells and tastes like dirty socks!" I said. Now, word of clarification here, I really don't know what smelly socks taste like, but I imagine this is what they would taste like. I really think a smelly sport sock was crammed into the bottom of the coffee pot.

"It's fine," she repeats as she tries not to smell as she sips. Then she does her usual- careful taste test- by swirling it around in her mouth. Each time she did this I whispered to her "yuuuuummy, dirty socks." "Okay!" she finally agreed putting her cup down. My crafting sister is a connoisseur of good taste, but not at midnight and not when it comes to coffee, but I love her anyway. Sometimes the big sister just needs to put her foot down.  Hey, where's my sock?