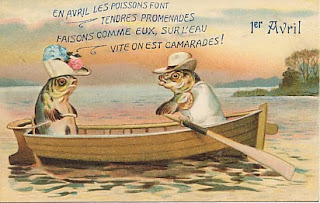 Historically it's still unclear exactly when and how April Fools became the beloved silly holiday that many around the world still celebrate today.
Naturally, I like the version of the story that this all originated in France. The story goes that during the reign of King Charles the IX in the 16th century, the powers that be decided to change from the Julian Calendar to the Gregorian Calendar. Under the Julian calendar New Years week ran between March 25th to April 1st. However, the Gregorian Calendar moved New Years to one day on January 1st.
Since there was no pony express, CNN or Internet at the time, not everyone knew about this change. Although, apparently some citizens knew of the change, but didn't want to conform to it. Wouldn't you rather celebrate something for a whole week rather than one messily day? Anyway, for those who didn't conform they were deemed "April Fools".
Those who were labeled as “fools” were then subjected to a variety of practical jokes. Some of the silliness included people being sent on fake errands, or receiving invitations to parties that were nonexistent, or being told there was going to be a ferret fair.
Naturally, this is all supposed to be in good fun. Like Marie Antoinette and her 3-ring Circus with her costumed laden trained ferrets. Anyway, for those of you who were tricked by our April Fools prank, it just goes to show me that we would be able to do just about anything totally ridiculous and you would support us anyway. And those of you who were skeptics from the beginning, it makes me wonder if you haven't had the wool pulled over your eyes just one too many times.
Why have I selected the post card featuring two fish? Well, according to tradition those who were fooled by the prank were called  "poisson d’avril”, or April Fish, because a young and gullible fish is easily caught!  Just and FYI, although I have had the wool pulled over my eyes more times than I can remember, I continue to be a poisson d'avril. Thank you for all the fun!