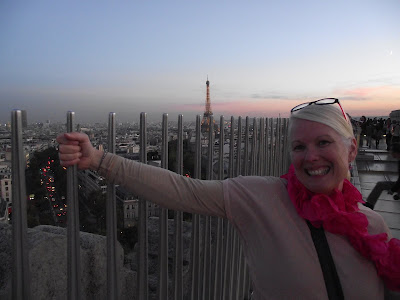 "Look Hal," a woman with a thick southern drawl said to the man she was with, "we climbed all this way and it all looks the same." For this woman who walked up all 234 steps to the top of the Arc de Triomphe to see one of the most perfect 365 degree views of Paris, she was clearly disappointed and promptly left with a very tired man in tow. I have never thought that about Paris. To me,there is a surprise around every corner. I suppose to the untrained eye and to someone who hasn't been to Paris, it could all look the same.
Look over my shoulder, there's the Eiffel Tower- gleaming in the sunset. If you walk around the perimeter of the Arc you would see the picturesque views of the Sacre Coeur, La Defense, Notre Dame, St. Sulpice, Le Grand et le Petit Palais and the famous Champs-Elysees. Then nestled among these famous monuments are the lovely markets, the newspaper kiosks, the bountiful flower and fruit stands and cafes. You would hear the roar of the Metro when it emerges from underground, the honking of car horns as they all take their chances whipping around the Arc de Triomphe. And you would see the perfectly sweet apartments all sitting side by side. You might think this sounds like any other big city, but it's like no other place I have been.
Paris is a combination of living in the present while living among its past. Knowing that I am doing what centuries of people have done has a profound affect on me. The delight in partaking in a dinner that could take hours -- and although the city bustles, there is no rush to leave anytime soon. The shopping for each item at specialty shops, being at the foot of the Eiffel Tower waiting for the lights to begin to twinkle and being awestruck each and every time. The chestnut trees that line the Seine and the barges of excited people on them. It's the creperie that serves up a fresh crepe oozing with Nutella as you listen to French music playing through the tiny speakers, walking through Pere Lachaise cemetery to pay respects to Edith Piaf, Sarah Bernhardt, Chopin, Balzac and Oscar Wilde, and then sitting on one of the benches to sit among our famous friends to dine on a freshly baked baguette.
It's the art and the architecture, and of course, it's the people too. The dear people of Paris who pack and unpack their goodies each morning at the market, the people in green jumpsuits that sweep the city streets early, the old man who plays the accordian as you dine hoping to get a little pocket change, the young men who roasts the freshly fallen chestnuts near the Trocadero, the children waiting in line at Champs du Mars for a pony ride, the sweet married couple that operate the best crepe stand in all of Paris, and dear Mamo, who owns our favorite pizza shop. He has big kisses for us each time we return to see him.
So, when this lady was so disappointed with Paris as she viewed it from a spot near the top of Paris, I felt sad for all she doesn't know and understand about Paris. However, it reminds me how much I have grown to know the place I love to be most of all and how much I have yet to discover.
I hope you will come by our market to find new Paris-inspired discoveries of your own February 10 from 5:00-8:00pm, February 12 from 10:00 am - 5:00 pm and February 13 from 12:00 - 4:00 pm. There's a sweet find around every corner at Confectionique, but trust me, it's not all the same.
Au revoir,
Anastasia
Posted by Anastasia Korbitz at 7:22 PM