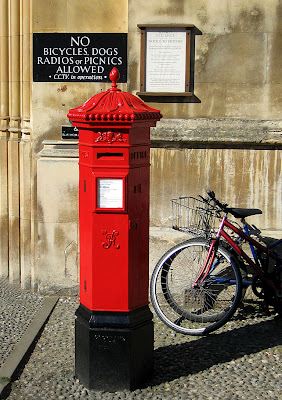 It was the longest line I'd ever seen at our local post office. It was so far out in the lobby that it was nearly out the front door. And, there was only one clerk on duty. With a sigh, I called my hubby on his cell as he sat outside with the car the running. "Hey Korbitz," I said, "This will be at least a 1/2 hour. Could you get me a Starbucks?" Off he went. Since the line seemed to be moving quite slowly, I decided to keep myself amused by watching each customer and postal clerk interaction. Here are some of my favorites:

1. The very elderly gentleman who moved at a snails pace in every painful part of the interaction.
2. The young man who didn't have any of the essential paperwork completed for sending his box, although he stood for at least 15 minutes right in front of the forms with a sign that read something like "Hey you, please fill out these forms for that type of box you are sending or else everyone will have to wait for you."
3. The lady who stood in line equally as long and then when she got to the counter spent a ridiculous amount of time locating her checkbook and an equal amount of time writing out the check.
4. The young woman who put her package on the counter only to find out that she had written the TO address on the back side of the box. Apparently, one should write the TO address on the side that says TO. The post master had her move aside to re-do the TO.
5. An older gentleman who stood in line long enough to have ordered and eaten a 3 course meal in the time it took for him to buy his two .98 cent stamps, which, by the way, he paid for in the exact change of $1.96.
6. Finally, the older lady who was sending baked goods. She was wearing white skinny pants, gold Coach tennis shoes and fur coat. The postmaster weighted the box and punched in some numbers and said, "You could pay $29.00 to get it there tomorrow, or $9.50 to get it there by Thursday, or $8.10 which could take up to 2 weeks." The woman replied, "I will pay the $8.10." I thought to myself, 'this is probably the very reason she can afford those Coach tennis shoes or she really doesn't much like the people she is sending the package to anyway.
These interactions and many others happened before I finally made it in to the main section of the post office. Wait, what is that I hear streaming from the boom box in the corner? Could it be holiday music? Nope, it was my utmost least favorite; country. Sorry to all the county music lovers out there, but just imagine waiting in a long line and then being subjected to your least favorite music of all time, under these circumstances it can be hard to be patient, but I was.
I finally did get my packages mailed by the kindly postal worker. The one thing I noticed through my 40 minute wait was that everyone in line was happy, smiling and talking with strangers.
"Merry Christmas I said as I walked out and several jolly people chimed in return, "Merry Christmas!"
Posted by Anastasia Korbitz at 1:20 PM