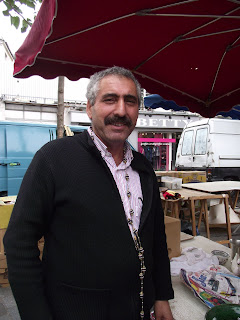 So, Jessica and I were quite thrilled when we came across a man who had containers of broken vintage jewelry. Who wouldn't think that is a thrilling find? Oh, we were so delighted as we spent a good deal of time picking out our favorite pieces. We had plans! We chatted away, the man gave us a basket to store our found treasures as we searched for more, but then came the time to discuss the cost.
Me: (confidently) "Monsieur, combien?"
Man: Takes all my treasures and spreads them out on the table, counting, looks at me sternly and says "Cinquante."
Me: Knowing this was beyond my budget I said "Quarante?"(10 Euros less)
Man: He shakes his head, "Non," He was rather emphatic.
Man: He begins to explain in rapid fashion in French, "blah, blah, nice piece, blah, blah, blah, priceless, blah, blah, blah, worth somesing, blah, blah, blah."
Jessica and I try to follow what he is saying, but we are assuming he is pointing to the particular pieces I have selected as being quite rare and worth somesing, so I remove them, place them in the container, look at him again and say, "Monsieur, combien?"
Man: Now quite impatient and reviewing my selection again he says "Quarante-cinq."
Me: I took out many pieces, I thought to myself, but he only went down 5 euros. Do I dare ask? Me: "Trente?" I ask nicely. Oh boy....here we go.
Man: Hands flaying about , walking away and walking back, shaking his head and in loud French proceeds to say: "blah, blah, blah, blah, what is zis, blah, blah, I give you good price, blah, blah, blah, zis is worse somesing, blah, blah, blah." Then the man calls over a woman who speaks a bit better English, but not by much, while Jessica and I still trying to understand.
We finally get to the point that we understand the the man feels that we think he isn't giving us a good price, when all we were just trying to convey is we had a budgeted amount we could spend. Once all is understood and we agreed on a price...everyone was happy.
Me: "Merci, Monsieur," I say with a smile.
Man: "De Rien, Madam, " He says with a smile patting my shoulder.
I was actually glad for this learning experience. It helped me understand that nuances in communication exists in every language and spending the time to ensure you are both understood and respected is a good thing for all involved.
Now it was Jessica's turn to negotiate.
Au revior,
Anastasia and Jessica
Posted by Anastasia Korbitz at 2:57 AM