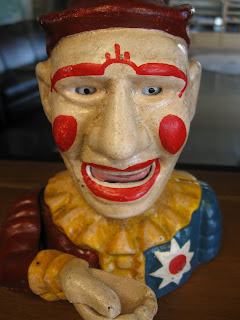 My father rarely used the word. He did so only when absolutely necessary- like during an intricate car repair. My Dad has restored old cars for years. He has created some real masterpieces. One day, when I was youngish, I was watching my Dad work on one of his own treasures, something went very wrong and F@#K. Shocked, I said "Daddy, you aren't supposed to say that word!" He put his tool down and looked at me with a straight face and said, "I know, but first of all, I was very frustrated and second of all it's not really a dirty word." Looking puzzled I said, "what do you mean, Mom says that's one of the worst words you could say." Confidently he replied,"Actually, it's a specific piece of equipment on a Navy ship." "It is?"I said. "Yes," his story continued, "but only those who work on Navy ship, like I once did, can use the word and have it not be considered a dirty word." So, essentially, he was telling me that the word could only be used exclusively by Navy men who once worked on a Navy ship. Made perfect sense to me.
When I married my husband, who was once a Naval Officer, and I used the word, only for an important reason of course. He looked at me shocked. I told him that I understood that only Naval men could use the word, but that I needed an exception in this case. He wanted further explanation and I told him the story. My husband shook his head and laughed, "that isn't true." He went on, "Your Dad was pulling your leg because F@#K is not a specific piece of equipment on a Navy ship."
I love this memory so much. It's one of those stories that shows just how much I loved and respected my Dad when I was a kid. What he said was golden and when he talked, I listened.
Happy Father's Day Dad. May you never lose your ability to pull someone's leg and get away with it.
au revior,
Anastasia
Posted by Anastasia Korbitz at 9:40 AM