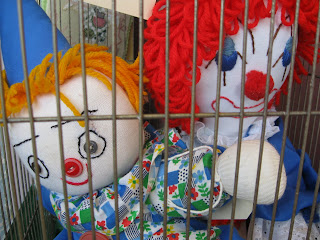 When I was listening to NPR radio the other evening there was a story about people who are afraid of clowns. The condition is called Coulrophobia. Apparently this is the 3rd most popular fear in Great Britain and the clowns of Great Britain didn't think that was very funny. They took matters into their own hands and developed a class for their Coulrophobia friends called Clownseling. Really it's systematic desensitization. The idea of slowing exposing someone to the unpleasant stimuli , in this case clowns, until they can conquer their fear.
The Coulrophobics go into a circus tent, meet the pre-clown people, watch the pre-clown people make themselves into clowns, interact with the clowns without leaving the tent in shutters of fear. Then they watch the clowns, clown-around and finally, dress up as clowns themselves. Makes me wonder if this isn't a clowns way of recruiting other potential clowns.
I'm not sure the "fear rank" of clowns in the Madison area, but since we don't do clownseling at our store, I've locked the two of them up in a cage. You can put your fingers through the bars...they won't bite. You can also purchase them if you wish. They are specifically looking to live with a family who are not Coulrophobics. Come see us at our Nuit Blanche market on June 24th from 6:00-9:00. Wine, goodies and a couple clowns...sounds like a happy evening don't ya think?