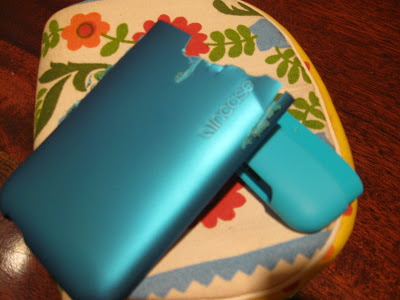 My hubby and son-in law pulled and tugged. "What's wrong with this thing, it won't budge?" my hubby said in a frustrated tone. "I don't know, but it seems stuck," said my son- in- law. My daughter chimes in, "but the package says it's a slider, doesn't that imply that it should come right off?" My hubby felt bad because he had picked this one out special for our for her birthday. It wasn't what we all hoped it would be so we wanted to remove it and just buy another one. Nope, it wasn't sliding back off.
The four of us tried all kinds of things to get the slider to slide. All sorts of pulling and tugging exercises. We tried peeling it off at the sides and prying it off with a small instrument. Then a stroke of genius, we all said aloud "lets cut if off." Rosie had surgical scissors, that would certainly remove anything. Hey, don't surgical scissors remove organs? Anyway, we tried cutting at it, but then we got worried it would scratch her precious new gift. Nope cutting didn't work. My son-in- law disappeared momentarily. We heard a lot of banging around in the basement. Finally, he emerged with the..... a die grinder. I looks like a drill with sandpaper attached. And, this tool needed to be plugged in. Hmm, this has certainly become a serious matter to require a power tool.
After a lot of grinding, the stupid slider finally let loose its death grip and released her new iPod Touch. After an hour, mission accomplished!
My hubby plans to return the stupid iPod Touch slider and request his money back as it obviously didn't perform as described. It should have been named the I-stuck. Ah birthdays.....
I hope you slide on over to the "Don't forget your Mum Market on May 8th." Confectionique is certainly a place you don't mind being stuck at for awhile.
Au revoir, Anastasia
Posted by Anastasia Korbitz at 2:25 PM