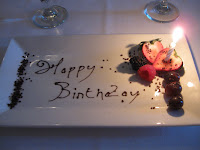 If I couldn't make it to Paris for my birthday, the next best thing could be fake-Paris, or Faris, as my daughter called it, at Epcot. Adam and I dined in a lovely Faris restaurant with an official French man as our waiter, we walked the city streets of Faris and even stood near the Eiffel Tower in Faris. It was very sweet. My hubby bought me a darling necklace in Morocco and we watched fireworks in Germany. All that after practically vomiting in the space ride.
When Adam and I got in line, a lovely young woman in a space suit asked "spin or no spin?" In unison and with confident smiles we looked at each other and told the woman in the space suit "spin." Hello, who wouldn't want to spin on a ride? We received pre-flight astronaut training from Gary Sinise (Lieutenant Dan). We also received at least 4 warnings from Lt. Dan, "if you are the kind of person who gets motion sickness you should consider exiting the ride." Then we were warned "if you go into the ride you must stare straight ahead and never close your eyes." I have always, always, always loved spinning rides and never had a problem, except last year after riding on the Gravitron once and the Tilt a Whirl twice, I went home and hurled, but that had never happened to me before. Anyway, it was probably a fluke.
There were 4 of us on a team. I was chosen by Lt. Dan to be the "navigator". Um, does he know that I still sometimes think Egypt is near Portugal (it really makes more sense to me) and that I still can't keep my left and right straight? Anyway, once inside and with my belongings secured, my tummy was already getting queasy....was this a good idea? No.
At lift-off it felt like the front of my face was smashed into the back of my head and my organs were probably resting on the seat behind me. Then I had to wonder, "why is my nose going numb and my vision blurry and did I just wet my pants?" So many times I thought I was going to hurl, "just stare ahead," I told myself. I don't even remember my role as the navigator, but I must have done something right as we did land the damn thing on Mars successfully. Once finished Adam wondered if I liked it space training. I think once he saw that the color had gone from my face, he knew that was a negative.
I am still queasy, but somehow I don't think the French cuisine, the one glass of red wine and one glass of white wine followed by an ice-cream sundae (yes, again) helped. But gosh what a fabulous 40-something birthday I had with Adam in Faris and beyond.
By the way, I still have 3 days left of my birthday week. I won't bore all of you with the details, but I do plan to continue the tradition of treating myself to a little something meaningful each day.
au revoir, Anastasia
Posted by Anastasia Korbitz at 11:22 PM