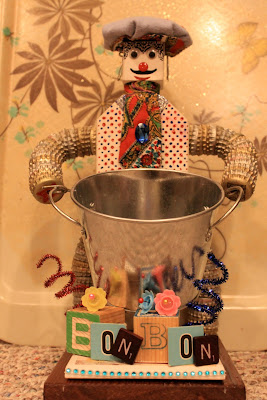 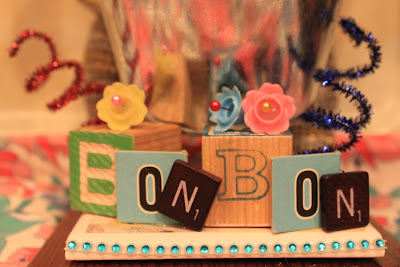 There he was. I was moments away from having to end my thrifting extravaganza-the end of me being at my happy place-time to head back home-when I saw him. There he was, bottle caps exposed with his pull tab ears. I love metal, as my crafting sister knows. I had to rescue it. I checked out and he was shoved into a bag without a chance to see him until today.
Today I really had a chance to meet him-I confectioniqued him and Voila! He is Monsieur. Isn't he lovely? I can't help myself from saying in my best attempt at a French accent:
"Ah oui, vould you like a little Bon Bon?"
Can you imagine how long it took to drink all that beer? (yes, they are vintage beer caps for his arms and legs) Or was it a night of festivities that ended with this awesome creation? One can only wonder...
Be sure to stop by Confectionique April 24th for a bit of Monsieur's Bon Bon. Even though my boys are begging me to not sell him, I think he deserves a proper place to give out Bon Bon-somewhere else. Somewhere where Bon Bon lasts longer than at my house .
Ciao,
Jessica
Posted by Anastasia Korbitz at 12:38 AM